I have a few fancy event coming up, so I was on the look out for a fancy dress.

When I saw Lace Jacquard Full Skirt Dress at Pepperberry, it certainly fit the bill! 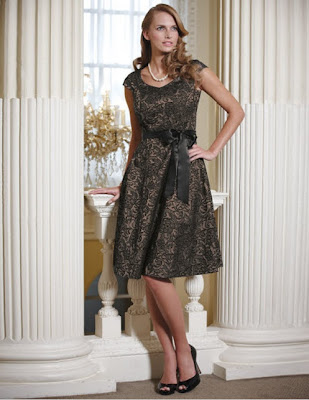 This was one of the few items made in the "Super Duper Curvy" size, which allows 5cm extra at the bust. Going by my last orders, this seemed like a good idea! So when the dress was put on sale, I snatched it up in 18 Super Duper Curvy. 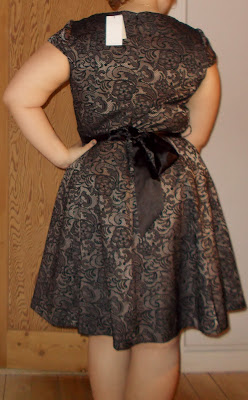 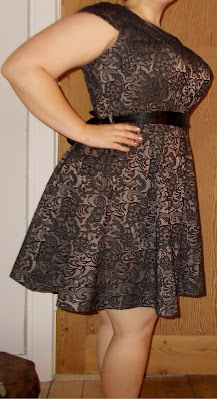 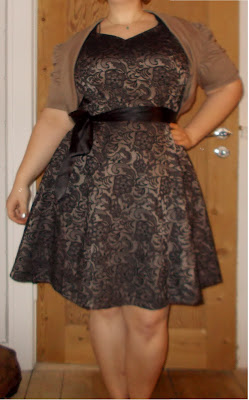 Isn't it beautiful? But, too large - everywhere. I had to tie the ribbon tight to get waist definition, which made the thick fabric of the dress bulky - the stiffness of the skirt also made all the excess fabric stick out a lot. But, good news I suppose, it also seemed large at the bust! Which meant I could get a 16 Super Duper Curvy! 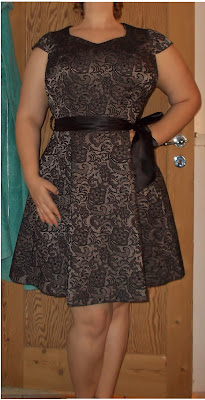 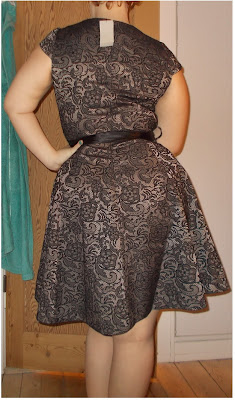 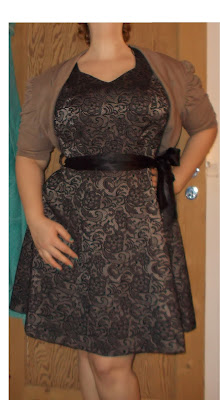 I'm so happy with the fit of this!

The waist-to-bust ratio of this is actually perfect for me! As you can see, I don't have to wear the ribbon at all to get the more nipped in look: 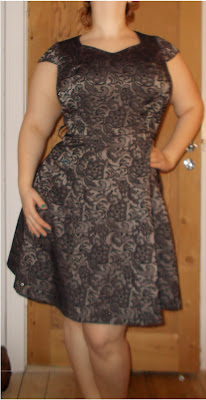 And the bust is perfect! I think if it was any smaller, it would make the waist ride up, but I would say this has the shape of rather 'pointy' breasts, so the apex had a bit extra fabric, whereas the top of my boobs was a nudge small-ish, but I suppose that is just the question of which bra you are wearing.
I have quite large upper-arms, so cap-sleeves are my enemy - both for the aestatic reason (which is easily solved by my matching shrug - I did as CurvyWordy and bulk-bought shrugs in every color off eBay!), but they also so often cut in and are too small. Not in this dress! They definitely had room enough, and stood out in a very flattering way - if the weather turned too hot for a shrug, I wouldn't mind exposing those :)
The fabric is quite heavy and structured, which means there's abseloutly no cling. There is a separate lining, which I honestly don't see the need for in this type fabric, and since the contrast between the nice, thick, lace fabric and the cheap, synthetic-feeling fabric of the lining, I think it would have felt like a nice dress if it wasn't there at all, but that might just be me. 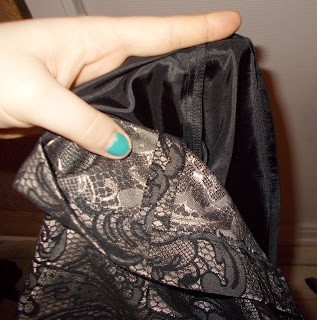 I think this could be an appropriate dress for lots of occasions, it could even be a casual dress if you had a bit more dressed up style than me. For a party dress for a young person such as myself, I do feel like the neckline could have been just a tad lower (this was my mothers input as well!) but I suppose for family or non-evening do's it's quite nice in this way, and I'm definitely looking forward to wearing it!

But oh, a splinter in my joy of this dress is, that Pepperberry no longer makes this size :( On the phone, they told me that Super Duper Curvy was a test run to see how it sold, and seeing as there aren't any new SDC's, I guess they wrote that project off. Pepperberry, please don't! Another thing I noted is, that this dress doesn't show up when searching by the size - I wonder what other goodies are not showing up? :o We could miss out on some of the best items, eek!

*EDIT: As pointed out to me on my facebook, you can find more Super Duper Curvy items at this link!
Posted by XLhourglass at 01:36