I feel like I've done a lot of positive reviews of Pepperberry, but I have also ordered some items recently that weren't all that..

The Cross Front Jersey Dress seemed like just my type - green (my favorite!), slightly more casual and appeared to be one to enhance curves, which I prefer!
I got it in 18SC, which seems to be my go-to-size with Pepperberry, though I'd far prefer 16SDC.

And the results are in: 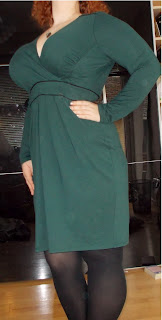 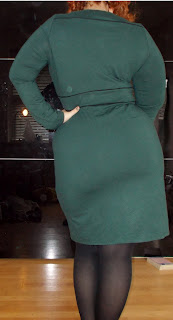 There are some clear signs of too little boob-space, since as you can see, the waist band rides up way too far in the front. I think this could have been fixed if just the band had been a lot tighter, since I didn't get this at all with the 16SDC, which suppoebly has about the same boob-space, but a tighter body.

Speaking of the waist band - I found it weird and bulky, which certainly doesn't help with showing off the waist, besides the fact that it's too high.

Another feature on this dress that makes me appear less curvy is the seams on the bust - the pleats (which I guess are to make more boob space) are in princes seams, about a third onto the boob, thus in my opinion, makes a weird placement - it either makes it look like your boobs are "too wide", like there weren't supposed to start further out than the seam. OR makes it look like they really do start more in the middle of your chest, thus making your boob-to-chest-ration appear smaller. Which I'm not a real fan of.

The bottom half (besides it starting slightly too high) is rather good in front - even though I have a considerable lower tummy, the pleats beautifully conceals this, without being baggy, and the length is also my prefered length. The back however, is not as good IMO. I do have a very significant bottom, but I do wish it had a bit of extra space back there - maybe with just 2 pleats? And while we are down there, I wish the bottom of the dress was  bit narrower, making the silhouette a bit more 8 shaped.

So, overall, I wasn't exactly overwhelmed by this dress. My mom however, loved it on me, but she genereally prefer much straighter figures than I do (something that has caused many clothing disagreements between us!).

All in all, I think I'll stick to Pepperberry's more simple tops, with the classic A-line skirts - the safe way to go!