Formal wear for the XL Hourglass

I don’t really do style posts, mainly because I do not have much style (how do you think I got cast for that make-over show I posted about?) but here comes one ;) I just found a nice, curvy- and plus-size-friendly outfit, so I had to share! 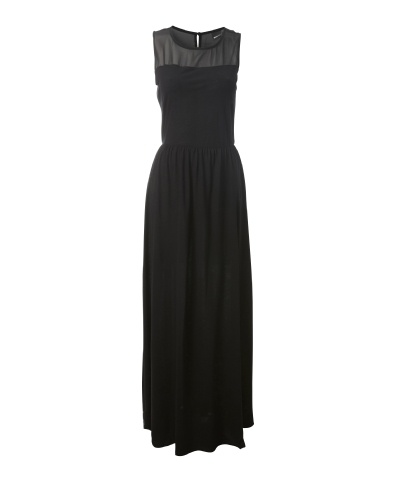 I’ve added sleeves to mine. Here in the midst of winter, bear arms isn’t really the look, plus I prefer not to show my upper arms in general, so I go through all sort of hoops to add sleeves to my tops and dresses (can’t tell you how many cut-up shirts I have!).
I had an old see-through shirt that had a tear at the body, making it a bit trashy, so I put those sleeves to good use. I felt it would be a shame to put a cardigan over this dress, since the sheer back and shoulders are kind of the point, so I felt this worked well. Gina Tricot has lots of sheer sleeved tops (must be the trend atm), but since it would be used to cut up, you can probably find something cheaper elsewhere, if you wish to do the same.
I really love this dress, as the full skirt makes it very comfortable and flattering, accentuating my waist-to-hip ratio, and not constricting in any way. The sheer shoulders gives a nice illusion of not being as covered as I actually am. It definitely doesn’t downplay my chest size, but seeing as I like that in order to balance out my larger lower half, that is just a plus for me! The soft material, viscose, feels soft and warm, and I don’t doubt I’ll feel nice and comfy in this during the Christmas festives J I would have wished the neckline was a bit larger, either showing a bit more shoulder or more collar bone, just so it isn’t that covered, but since I don’t have a sowing machine or any sowing skills, that is one alteration that will have to wait, if I decide to do it.
The sheerness of the back continues down a good bit lower than the buttons, which again helps balance out the covered-ness. And, with sheer rather than completely cut out, you can get away with a lot more, I think. A black bra going across the sheer area can easily look intended ;)

On to the sizing,  you can see from the stock photo that this dress obviously fits me differently than intended (aka. the skirt looks like it was supposed to start at the top of the hip, though on me, it is more like an empire cut), but I don’t mind, I think it looks fab J It’s a bit tighter across the seam where the opaque (I know it seems a bit see through due to the flash in the pictures, but it really isn’t) meets the sheer, so I wouldn’t want to size down, even though the rest could easily have been smaller: 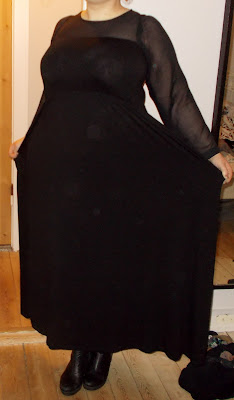 I generally find Gina Tricot to run much larger than other comparable brands, especially in those items listed S, M, L rather than numbers. 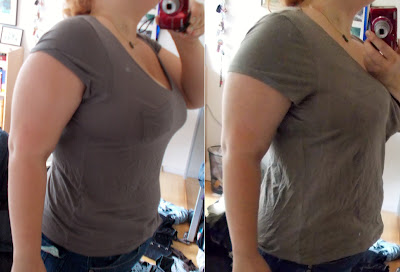 These tops look identical in the store, but the left is size XL from H&M, and the right is size L from Gina Tricot! And Gina Tricot also has up to XXL in some items, so even though they don’t have a plus-size collection like H&M does, I’d say they are a good place to go for larger sizes, even though their size chart doesn’t really indicate this: XL is said to match measurements B: 105cm/41” , W: 87cm/34”, H: 112cm/44”: This dress must be much larger than that in all three measurements, since I measure around 48”-34”-49”. So I think ladies much larger than me from the underbust and down would also have luck in a dress like this.


They don’t have this dress on their website for some reason, but it was part of the news in the store, so they should have plenty left if you go to one. If there is none near you, check these similar dresses you can shop at their site:

From left to right, that is the Majkan Dress, the Elin Dress, the Mildred Dress, and the Marcia Dress.

Because of the loose waist, I’ve added a belt. I don’t have many, but this one fits my needs. I don’t know the brand, but bought it at Gunnva, and they also had it in beige, and in bigger sizes (this was a “75”, and they also had it in “85”. I don’t think that is cm, since I wouldn’t be able to fit something that measured 75cm. Maybe they are inspired by EU bra-sizing? Since it is an under-bust belt). 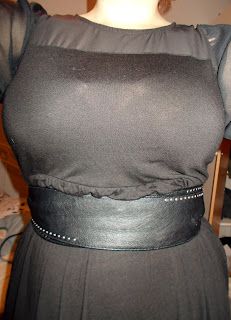 Note that it actually had 3 of those leather panels, but I cut one off, as it was just adding too much bulk. Now it can sit more smoothly at my waist and underbust.
If I want to wear this dress for not so late evening events, I think I’ll pair it with a more colorful belt. I want to wear it for Christmas I think, so I’ll try to get my hands on a red belt, and perhaps some red accessories to lighten it up a bit J

The shoes are from Vagabond. They are so my style, and very comfortable and practical, and I use them a lot, but they still look all new, so it’s excellent quality. I think a “lighter” shoe would match the elegant style of the dress better, but a) I don’t have other fancy shoes and b) I like these too much to pass up a chance to wear them ;) 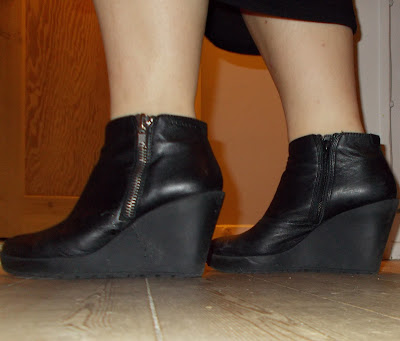 Under this dress, I am wearing Trinny&Susannah All In One Seamless Body Shaper in a size Medium.
I don’t know what’s up with the sizing, because according to their size charts, medium fits a waist of 27”-30”, which I am obviously not. But, this is the only shapewear piece I’ve tried that actually shaped my waist, which is sort of the point of why I want shape-wear in the first place, I have an annoying roll between my underbust and waist, and I have some rolls at the back, right around where I would like a belt to sit smoothly.
Extra bonus for giving me a nice bum: Despite being an hourglass, I don’t actually have a bum to write home about, my bottom half fullness is more due to my thighs, hips and lower belly. But in this piece of shapewear, I got a nice little shelf!
Speaking of my bottom fullness, aka. thighs, this is of course too tight there. Not as bad as on other pieces, showing that this piece is definitely more curvy in its sizing, so I can wear it without having to alter it/wear something  over it to keep it from rolling. I may still alter it at some point (as I’ve done with other pieces) to get a smoother look on my thighs in case I want to wear it with more form-fitted things.
I just said I didn’t have to wear something over it, but that is not entirely true: Because the fabric is stretched to it max, the texture get rather ribbed, meaning it makes a loud swooshing sound when I walk. But, easy fix, some cheapH&M leggings in 2xl cut off at mid thigh, and you are ready to go (are you sensing a trend of me cutting up stuff to make things work?)
One thing that puzzles me about shapewear, is that the backs come up so high – if this one was to sit tight and shaping at the top of my bra-band too, it would come up to over my shoulders, and the straps are way too long for that. I may alter this, cut it lower in the back/make the straps shorter. But not for this dress J
A last note of praise for this shapewear piece is the crotch area. These all in ones are a nightmare to wear to a party, because they aren’t meant to just quickly take off and on, but still the crotch area isn’t always so manageable. But this one is much better, it is more elastic in that area, which means it also gets bigger when you put it on, and isn’t so much of a hassle. To make it even less of a hassle, I have cut the seams a bit of the overlap, so they overlap more loosely, and I now won’t worry one bit when getting tipsy at a party.

I am wearing this dress with my newest Ewa Michalak bra, since they black and nude colors work well with this, even if it is seen a bit at the corners of the sheer parts, the nude will camouflage itself, and the black will look like a seam/part of the look. Plus, no bra gives as attractive a shape as the EM’s do, so I really prefer to wear it J
Posted by XLhourglass at 12:17